Join WTFoot and discover everything you want to know about his current girlfriend or wife, his shocking salary and the amazing tattoos that are inked on his body. Find out what house the German/Greek left back lives in or have a quick look at his cars! 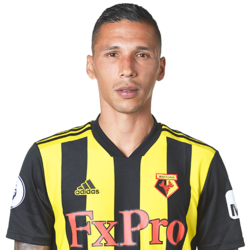 Wow! This means the average man in the UK needs to work for at least 4.2 years to earn the same as The Terrorizer earns in only 1 month.

After a nomadic youth career the German born Greek international signed for 2. Bundesliga club 1860 Munich. In 2010 he signed for Superleague Greece side Olympiacos, followed by a solitary season with Serie A club AS Roma in 2014/15. In 2015/16 the Greek defender moved to England to sign for Premier League club Watford. He has a net worth estimated at €9 million (£8 million). Now at the twilight of his career, aged 34, his market value stands at €2 million (£1.8 million).

Holebas Tattoo - Does he have one?