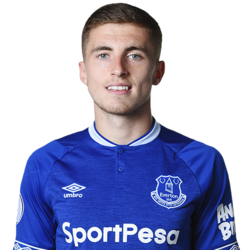 Born in Liverpool, England, he started his footballing prospects with Everton's youth academy in 2006. Coming up through he ranks he signed his first professional contract with he club in 2014. He was sent on loan to League One side Wigan Athletic ahead of the 2015/16 season in order to gain valuable experience playing for the first team in a competitive league on a weekly basis. He made 7 appearances for The Latics before returning to his parent club in January, he headed out for a second loan spell that very month to League Two side Oxford United till the end of the season. The young defender fared much better dropping down a division as he made 17 appearances for The U's. He would make his Premier League debut for Everton in May 2016 coming on as a substitute against Norwich City. In the 2017/18 season he began getting regular opportunities at first team football under Ronald Koeman, the defender made 25 appearance in total with 19 of them coming in the Premier League. The youngster also shined for his national side in international competitions, he was part of the England under-17 side that won the 2014 UEFA European U17 Championship, converting a match winning penalty in the final against the Netherlands; the defender also played in all seven matches of England's FIFA U20 World Cup triumph in South Korea.

Wow! This means the average man in the UK needs to work for at least 1.9 years to earn the same as Jonny earns in only 1 month.

The youngster came through Everton's youth academy before signing a contract with the first team which puts his net worth at an estimated €4.5 million (£3.9 million). The Englishman has a market value of €5.2 million (£4.5 million).

Kenny Tattoo - Does he have one?