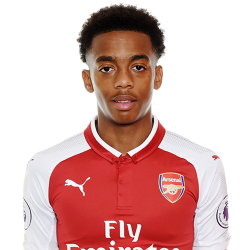 Wow! This means the average man in the UK needs to work for at least 1 years to earn the same as Joe The Great earns in only 1 month.

His skills, age and potential gives him an estimated Market Value of 2 Million Euro (1.7 Million Pound). He is playing more and more in the first team and is one of the most promising midfielders of England. He just signed his first professional contract and still has to proof himself. In January 2017 he signed a long term contract at Arsenal, which binds him to the Gunners un till 2021. He currently earns 600.000 Euro (540.000 Pound).

Willock Tattoo - Does he have one?