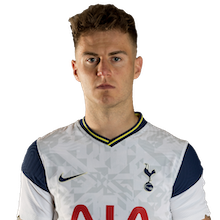 Wow! This means the average man in the UK needs to work for at least 1.2 years to earn the same as Joe earns in only 1 month.

The 22-year old centre back from Wales moved from hometown club Swansea City to Premier League stalwarts Tottenham Hotspur in the summer of 2020. Joe's net worth shot up to approximately 3 Million Euro (2.7 Million Pound) after putting pen to paper with the London club, Spurs made an investment of 7 Million Euro (6.4 Million Pound) to bring Joe to White Hart Lane and we believe his market value now lies north of that figure.

Rodon Tattoo - Does he have one?