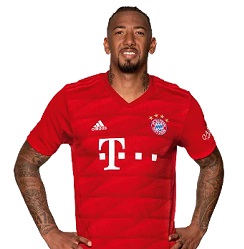 Wow! This means the average man in the UK needs to work for at least 28.7 years to earn the same as Jerry earns in only 1 month.

The German centre-back has had a storied career with humongous success at both international and club level. Having played at the top-level for more than a decade, the Bayern Munich defender has a net worth of €95 million (£82 million). The 31-year old is nearing the end of his career and holds a market value in the region of €15 million (£13 million).

Boateng Tattoo - Does he have one?