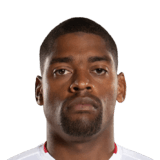 Wow! This means the average man in the UK needs to work for at least 3.8 years to earn the same as O Terible earns in only 1 month.

He has been playing pro football for a long while now and he is getting paid big bucks at every club that he has played at. Right now he is earning a whopping 1.6 million euro's per year so his net worth is rising sharply. At the moment he is worth 7 Million Euro (6.3 Million Pound). His market value has developed rather steadily. At the moment the man from Portugal is worth about 9 Million Euro (8.1 Million Pound).

Cavaleiro Tattoo - Does he have one?