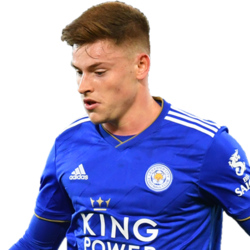 Wow! This means the average man in the UK needs to work for at least 1.2 years to earn the same as The Ginger Messi earns in only 1 month.

The young midfielder is only 21 years old and the 4 year contract signed with Leicester City in 2017 puts his net worth somewhere around €1.6 million (£1.4 million). His considerable talents already command a sizeable price with his market value estimated to be upwards €7 million (£6 million).

Barnes Tattoo - Does he have one?