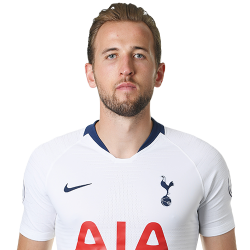 Kane was born in Walthamstow, a major district in the east of London. In his youth he played for among others Arsenal and Watford. But he started his professional career at Tottenham Hotspur. He joined the club in 2004 and joined the first team five years later, in 2009: he was only 16 years old by then. Before he made his debut for the Spurs he went on loan to several clubs such as Leyton Orient, Millwall, Leicester City and Norwich City. He did well, but nothing spectacular. Almost nobody expect the amazing development that would follow. When Mauricio Pochettino became the head coach in 2014, Hurricane start to become more and more important at White Hart Lane. In his first full season for Tottenham Hotspur he made immediately 31 goals (across all competitions). He became the second best goalscorer of the Premier League and won the PFA Young Player of the Year award. And the following seasons? He simply moved on with making goals. Many goals! He is a real centre forward. The best thing about him? That perhaps his passion for the game. He loves football, he loves playing and he loves scoring goals.

Wow! This means the average man in the UK needs to work for at least 27 years to earn the same as Hurricane earns in only 1 month.

In June 2018 he signed a new contract with Tottenham Hotspur worth up to 62.4 Million Pound. This makes him earn almost 200,000 Pound a week! Hurricane is one of the best earning players in the Premier League. His net worth is currently estimated at 45 Million Euro (38.8 Million Pound). Want to buy him? Well, he is very, very expensive: perhaps the most expensive English player ever. His current market value is 150 Million Euro (130 Million Pound).

Kane Tattoo - Does he have one?