Join WTFoot and discover everything you want to know about his current girlfriend or wife, his shocking salary and the amazing tattoos that are inked on his body. Find out what house the Swiss defensive midfielder lives in or have a quick look at his cars! 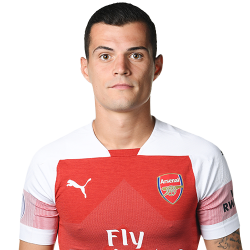 Wow! This means the average man in the UK needs to work for at least 12 years to earn the same as Xhakaboom earns in only 1 month.

As said before, in 2016 he signed a very nice contract at Arsenal. This contract will make him earn 5.0 Million Euro (4.4 Million Pound) per year. A simple calculation learns us that he earns €13,500 (£12,000) per day! Well done, Granit. He surely does not have to worry about money anymore for the rest of life. He is still a very young player, but already played several years at the highest level in the Bundesliga. And that's good business as well. His estimated net worth is 20 Million Euro (17.7 Million Pound). Arsenal bought im in 2016 for 35 Million Euro, in the last 2 years his market value slightly raised to 40 Million Euro (35 Million Pound).

Xhaka Tattoo - Does he have one?