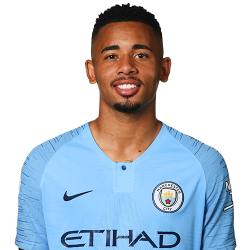 Wow! This means the average man in the UK needs to work for at least 22 years to earn the same as None earns in only 1 month.

He has been playing at Manchester City for a few years now. The contract of the Brazilian was upgraded in the summer of 2018. In the Brazilian league the salaries might not be extremely high but in the BPL young stars are bound to make a lot of cash. As a result the striker has already made a substantial amount of money at a young age.

Jesus Tattoo - Does he have one?