Join WTFoot and discover everything you want to know about his current girlfriend or wife, his shocking salary and the amazing tattoos that are inked on his body. Find out what house the Argentinian goalkeeper lives in or have a quick look at his cars! 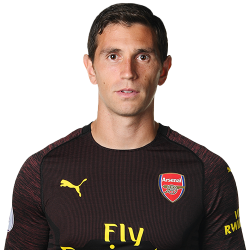 Wow! This means the average man in the UK needs to work for at least 1 years to earn the same as Martininho earns in only 1 month.

He has been playing professional football for quite a while now, but he has never really made the big bucks. We dont have to feel sorry for this lad though as he still comfortably a millionaire. His current net worth is around 1.5 Million Euro (1.2 Million Pound). We think his market value is rather low, given the fact that he has not managed to really make a name for himself eventhough he was signed by Arsenal a long time ago. His net worth is around 3.7 Million Euro (3.4 Million Pound).

Martinez Tattoo - Does he have one?

Another spicy list? Our Top 30 Sexiest Arsenal Wives and Girlfriends