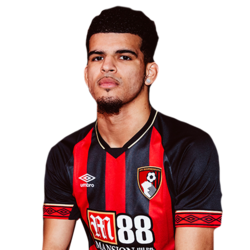 Goalanke was born in Reading to an English mother and a Nigerian father. He started his career at the youth academy of Chelsea in 2004. In the 2013-14 season he was one of the most promising young players of the Blues by making 20 goals in 25 games for the U18 team. He signed his first professional contract at the club in September 2014. He made his official debut for Chelsea in the UEFA Champions League against NK Maribot (6-0 win). That season he was a regular of Chelsea U21, well, let's call him the star of the team. He finished as the top scorer of the UEFA Youth League group stage and was awarded as the Chelsea Academy Player of the Year. In the 2015-16 season he moved on loan to the Eredivisie club Vitesse to gain experience. In played very well that season and ended with 7 goals in 25 games. Chelsea took him back to Stamford Bridge and he became the third striker behind Diego Costa and Michy Batshuayi. Antonio Conte did not seem to be a great fan of him, though. He didn't play a single match that season. In the summer of 2017 his contract at Chelsea expired and Liverpool was glad to pick him up. He made his debut in the UEFA Champions League (again) against Hoffenheim (1-0 win) His first Premier League game ever was against Stoke City (30 November 2017). He played over 20 games for Liverpool but never managed to become a regular in the first team. In January 2019 he signed a long-term contract at AFC Bouremouth, who bought him for 19 Million Pound.

Wow! This means the average man in the UK needs to work for at least 4 years to earn the same as Goalanke earns in only 1 month.

Goalanke was one of the most promising products of Chelsea's youth academy and was earning 2 Million Pound per year at Stamford Bridge. He then moved to Liverpool where he earned 1.3 Million Euro per year. His current net worth is 8.6 Million Pound. Bournemouth invested big money in this lad and bought him for 19 Million Pound. His current market value is estimated at 15.5 Million Pound.

Solanke Tattoo - Does he have one?