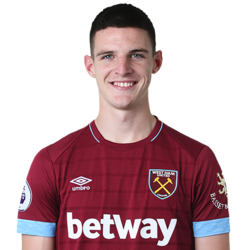 In July 1st, 2017 the centre back signed a contract with West Ham United that nets him a whopping salary of 4 Hundred Thousand Euro (3 Hundred and 40 Thousand Pounds) per year. We have crunched the numbers, this means he earns €1,093 (£938) per day and €46 (£39) per hour!
Since you've been viewing this page, Declan Rice has earned...

Wow! This means the average man in the UK needs to work for at least 1.0 years to earn the same as Deccers earns in only 1 month.

The youngster has just recently signed a professional contract so his net worth is estimated to be around €580,000 (£500,000) a value that will surely see meteoric rise in the years to come. One of the most promising talents in world football the young defender already has lots of admirers putting his market value to a lofty €35 million (£30 million) and that too at just 20 years of age.

Rice Tattoo - Does he have one?