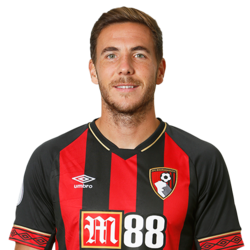 Hi there fellow WTFoot fan. We are giving you the very warmest of welcomes. Welcome to the wiki of Gossy, the reliable central midfielder of AFC Bournemouth who is currently playing in the English Premier League. He started his career at the youth academy of Brixham but it wasn't long before other teams became interested in his services. He made his professional debut for Plymouth Argyle in the second highest division of English football. Afterwards he went on to play for Everton, Newcastle United and Blackpool before finally joining Bournemouth in 2015. Ever since he joined Bournemouth they have played in the Premier League and Gossy has proven to be one of the most reliable players in the midfield. We are very happy to have you here so we can share all the information there is to around about this fascinating player. He has actually also played games for the English national team, The Three Lions. He has not played for the first team of England though, only for several youth-teams.

Wow! This means the average man in the UK needs to work for at least 5 years to earn the same as Gossy earns in only 1 month.

He has been playing Premier League football for a lot of years and we all know how much is paid in the highest division of English professional football. His current net worth is roughly 10 Million Euro (9 Million Pound). His market value has been developing in a rather stable manner. His current market value is about 6 Million Euro (5.1 Million Pound).

Gosling Tattoo - Does he have one?