Join WTFoot and discover everything you want to know about his current girlfriend or wife, his shocking salary and the amazing tattoos that are inked on his body. Find out what house the Ghanaian winger lives in or have a quick look at his cars! 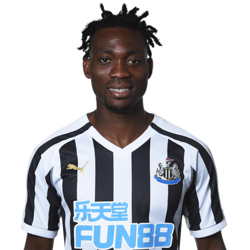 Welcome WTFoot fans from all over the globe. Welcome to the wiki of this player who is nickname the Ghanaian Messi. He always been one of the most talented players to come out of Ghana and his talent was first recognized by FC Porto. They attracted him from Feyenoord Fetteh, a team that played in Ghana and was having a collaboration with Feyenoord Rotterdam from the Netherlands. He only played at Porto for a couple of seasons as he was loaned out several times. In the summer of 2013 he was bought by Chelsea but he never managed to play for the Blues. He was loaned out again to several teams in Europe, including Vitesse, Everton, Bournemouth and Newcastle. It was the Magpies who finally bought him from Chelsea for a fee of roughly 6.2 million Pounds. He has obviously also played international football for his homecountry. He was always one of the betters players in the Ghana squad and he has already managed to play more than 40 international matches and even scoring a bunch of goals. This guy is always a threat to score. For now lets have a look at his life.

Wow! This means the average man in the UK needs to work for at least 4.4 years to earn the same as Ghanaian Messi earns in only 1 month.

He has always been a great talent but he has not yet made it big, so to say. He is still absolutely loaded though so don't feel too sorry for the lad. He is currently worth roughly 12 Million Euro (10 Million Pound). His market value was once sky high but it has slowly declined over the last few years. Currently his market value is about 8 Million Euro (7.1 Million Pound).

Atsu Tattoo - Does he have one?