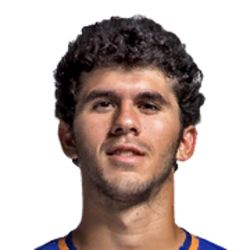 Born in Mataró, Barcelona, Catalunya, son of footballer Francesc, joined FC Barcelona's famous youth academy, La Masia, in 2005 aged 7. After progressing through the youth ranks, he made his debut for Barcelona's reserve team in 2015, coming on as late substitute in a 0-0 draw against Segunda División B side CF Pobla de Mafumet. Since then he has made 89 appearances for Barcelona B, scoring 18 goals and 14 assists. His first call-up to Barcelona's main squad came on 10 February 2016, the youngster remained an unused substitute as Barcelona drew 1-1 against Valencia in the second leg of the Copa del Rey semi-finals. His debut came in the same competition on 30 November 2016, the youngster went on to score the equalizer as the Catalans were held to a 1-1 draw away to Hércules CF. The Spaniard made his La Liga debut on 2 April 2017, replacing Ivan Rakitić in the second-half as Barcelona ran out 4-1 winners against Granada CF. He scored his first league goal against Villarreal CF on 2 December 2018, two days later he was officially promoted to the first team. Since 2016, the central midfielder has represented his boyhood club 34 times in all competitions. During that period he has collected the winner's medal for 2018/19 La Liga, 2016/17 & 2017/18 Copa del Rey, and 2018 Supercopa de España.
ADVERTISEMENT

Wow! This means the average man in the UK needs to work for at least 1.0 years to earn the same as Maradona earns in only 1 month.

The La Masia graduate signed his first professional contract with his hometown club FC Barcelona in 2016 and since has built up a net worth close to €1.7 million (£1.5 million). Playing for arguably the biggest club in world football, aged 21, the youngster's market value sits at a staggering €30 million.

Aleña Tattoo - Does he have one?