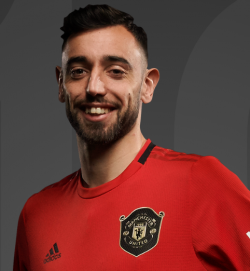 In November 2019 the midfielder signed a contract with Manchester United that nets him a whopping salary of 3 Million Euro (2.5 Million Pound) per year. We have crunched the numbers, this means he earns €8,219 (£6,849) per day and €342 (£285) per hour!
Since you've been viewing this page, Bruno Fernandes has earned...

Wow! This means the average man in the UK needs to work for at least 6.94 years to earn the same as Super Bruno earns in only 1 month.

His net worth stands at 7 million Euros as of writing. His market value has risen considerably after several top European clubs have expressed their interest in signing him.

Fernandes Tattoo - Does he have one?