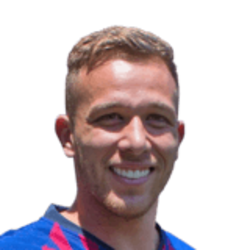 Wow! This means the average man in the UK needs to work for at least 5.9 years to earn the same as The Title Collector earns in only 1 month.

The Brazilian midfield maestro came through the youth ranks at Grêmio and moved to Barcelona in 2018 for a fee close to €40 million. His multi-million year deal with the Catalan giants has seen net worth rise to €13.9 million (£12 million). Still only 22 years of age and already regarded as one of the best central midfielder on the planet, the man from Brazil has a market value north of €63 million (£58 million).

Arthur Tattoo - Does he have one?