Join WTFoot and discover everything you want to know about his current girlfriend or wife, his shocking salary and the amazing tattoos that are inked on his body. Find out what house the Dutch right winger lives in or have a quick look at his cars! 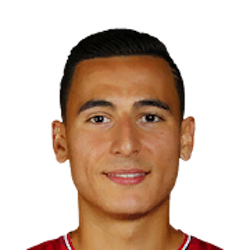 El Ghazi was born in Barendrecht (the Netherlands) in May 1995 and started playing football at the local club BVV Barendrecht. In 2006 he joined the youth academy of Feyenoord, but after two years he left the first club of Rotterdam and made the remarkable step to the amateur club Spartaan '20. Two years later he joined Sparta Rotterdam, for whom he played four seasons and showed his enormous potential. In 2013 he joined the biggest club of the Netherlands, Ajax Amsterdam. During the 2014-15 pre-season campaign he made 8 goals in 150 minutes of playing time for the first team. Of course he joined the first-team squad after this tremendous pre-season campaign and made his official debut for Ajax in the 2015 Johan Cruijff Shield game against PEC Zwolle (0-1 loss). He made his Eredivisie debut in the season opener against Vitesse. His first Champions League goal was in October 2014 against nobody else than FC Barcelona (3-1 loss). He became a regular in the Johan Cruijff ArenA, and then moved to Lille in January 2017 for a 8 Million Euro fee. After one year in Lille he moved on loan to Championship club Aston Villa. He played a first great season and helped them to promote back to the Premier League. In the summer of 2019, it was announced that Villa signed him permanently for an undisclosed fee.

Wow! This means the average man in the UK needs to work for at least 4 years to earn the same as FullGhazi earns in only 1 month.

El Ghazi Tattoo - Does he have one?