Join WTFoot and discover everything you want to know about his current girlfriend or wife, his shocking salary and the amazing tattoos that are inked on his body. Find out what house the Ecuadorian right midfielder lives in or have a quick look at his cars! 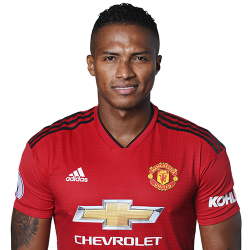 Luis Antonio Valencia Mosquera is a professional footballer from Ecuador who plays for Manchester United and the national Ecuadorian team. During his career he played everywhere at the right side: right back, right midfielder, right winger. El Comandante is one of the most multifunctional players out there and that is what makes him a real team player! He started his career at El Nacional in Ecuador but moved to Villareal after two years in which he showed his amazing potential. His move to Spain was not immediately an amazing success, so he went on loan to Recreativo de Heulva. It was in 2006 when he moved to the Premier League, the league in which he seems to play since forever! After two highly successful years in Wigan he became the first summer signing of Manchester United in 2009. He signed a four year contract at Old Trafford, and was bought for about 16 Million Pound. With Man. Utd he won the Premier League, the FA Cup, the League Cup and even the Europe League! In the summer of 2019 he decided it was time for him to move back home. He is going to play in Quito for LDU Quito.

Wow! This means the average man in the UK needs to work for at least 15 years to earn the same as El Comandante earns in only 1 month.

In 2012 his market value was (according to transfermarket.com) about 27.5 Million Euro, but it won't come as a surprise that this is much less right now. His contract at The Red Devils is almost expiring and he's not the youngest player anymore either. His current market value is 5 Million Euro. He had highly successfull years at Manchester United and earned a royal salary in exchange: his current net worth is estimated at 40 Million Euro (35 Million Pound)! Where will this lad continue his career? In Quito apparently!

Valencia Tattoo - Does he have one?