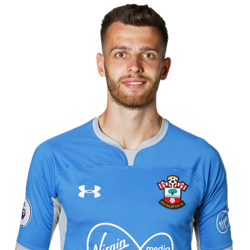 Wow! This means the average man in the UK needs to work for at least 6.4 years to earn the same as Gunnsey earns in only 1 month.

The Englishman has signed his first big money contract with Southampton which puts his net worth at an estimated €11.8 million (£10.4 million). The goalkeeper is young but unproven at the top level and has a market value somewhere in the region of €10.2 million (£9 million)

Gunn Tattoo - Does he have one?