Join WTFoot and discover everything you want to know about his current girlfriend or wife, his shocking salary and the amazing tattoos that are inked on his body. Find out what house the English/Jamaican centre back lives in or have a quick look at his cars! 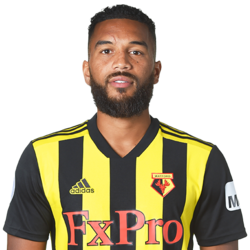 Wow! This means the average man in the UK needs to work for at least 2.2 years to earn the same as Mari earns in only 1 month.

The Jamaican International was born and bred in English Football, from coming through Waford's youth academy, to going on to represent the club as a professional in 2005. He moved to Reading in 2012, and then Crystal Palace in 2013, to later come full circle back to his hometown club in 2016. The midfielder has a net worth close to €6 million (£5.2 million). 33 years of age and about to call time on a decade plus playing career, the midfielder's market value sits at €1.5 million (£1.3 million).

Mariappa Tattoo - Does he have one?