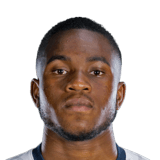 Wow! This means the average man in the UK needs to work for at least 3.3 years to earn the same as Adam earns in only 1 month.

The youngster started with League One outfits Charlton Athletic before signing his first big contract with Premier League club Everton which puts his net worth at an estimated €5.8 million (£5 million). His potential at such an early age has put his market value in the region of €20.9 million (£18 million).

Lookman Tattoo - Does he have one?