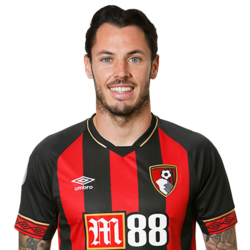 Smithy is a product of the Tottenham Hotspur youth academy. He was born in London, a true kid of the club, but played only one official game in the first team of the Spurs. In August 2009 he joined Wycombe Wanderers on a short-term loan. He had to cover the gap that appeared when two right backs of Wycombe Wanderers got severely injured. This lad went to plenty of clubs on loan. First Torquay United (2009-10 season - 16 apps), then AFC Bournemouth (2010-11 season – 38 apps), then Milton Keynes Dons (2011-12 season – 17 apps), then Milwall (2012-13 season – 25 Apps) and finally Derby Country (2013-14 season – 8 apps). Since he played a very good 2010-11 season at The Cherries they surely did not forget about him. Smithy was very happy to sign a permanent contract at AFC Bournemouth in January 2014. He signed a three-and-a-half-year deal at Dean Court. In a couple of years he became one of the most respected and valuable players of the club. His most important moment? That was his winning goal against West Bromwich Albion in December 2015. He became the match winner of this very important game.

Wow! This means the average man in the UK needs to work for at least 5 years to earn the same as Smithy earns in only 1 month.

Adam joined Tottenham Hotspur already at a very young age and was club hopping ever since. We are very glad for him that he finally signed a permanent contract at Bournemouth. His current net worth is 7 Million Euro (6 Million Pound). This lad played for all the England youth teams and still has plenty of years to go at the highest level of football. His market value is 10 Million Euro (8.6 Million Pound).

Smith Tattoo - Does he have one?