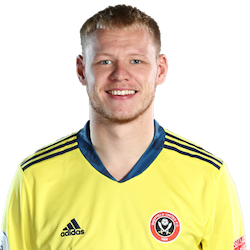 Wow! This means the average man in the UK needs to work for at least 6.1 years to earn the same as Ramsy earns in only 1 month.

A product of Sheffield United's youth academy Ramsy moved to AFC Bournemouth in 2017 to play Premier League football. In the summer of 2020 the prodigal son made his return to The Blades signing a long term contract which saw his net worth rise to an estimated 10 Million Euro (9.1 Million Pound). Sheffield United paid a hefty 20.4 Million Euro (18.5 Million Pound) to resign their former goalie and prospective suitors will have to pay in excess of that fee to get the English goalkeeper off of Sheffield.

Ramsdale Tattoo - Does he have one?

Born on May 14th, 1998, in Staffordshire, England, he spent the majority of his youth career at Bolton Wanderers before joining Sheffield United towards the later part of his development phase. In the summer of 2016 Ramsy signed his first professional contract, putting pen to paper to sign for The Blades. The goalie made his debut in the FA Cup, keeping a clean sheet in a 6-0 win over Leyton Orient. Premier League club AFC Bournemouth took notice of the young man’s potential and signed him for a fee £1 million on January 31st, 2017. The up and coming shot stopper found himself down the pecking order at Dean Court, and decided to go on loan to gain experience. He spent the following couple of season’s on loan, first at League Two club Chesterfield (2017/18), and then at League One outfit AFC Wimbledon (2018/19). With plenty of football under his belt Ramsy returned to Dean Court for the 2019/20 season and was installed as Bournemouth’s first choice goalkeeper. He made 37 appearances in the league and his performances through what proved to be an extremely difficult season won him ‘AFC Bournemouth Supporters’ Player of the Year’ award. Ultimately The Cherries would suffer relegation and Ramsy would rejoin Sheffield United in the summer of 2020 in a deal worth £18.5 million.