Join us and discover everything you want to know about his current girlfriend or wife, his incredible salary and the amazing tattoos that are inked on his body. Find out what house the American running back lives in or have a quick look at his cars! 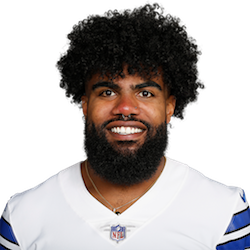 This first team All-Pro in 2016 completely transformed the identity of a football team overnight. He has brought back what it means to be a Dallas Cowboy once again. This running back loves rushing at opponents so much, is a fanatic for contact, and loves pounding the defense when he's charging. This 24-year-old is an expert at amplifying yard gains. If you were looking at a yard, he's got you three. A fourth overall pick in the first round of the 2016 NFL Draft, this epitome of athleticism combines pass-catching and blocking skills to effectively justify the label of being the most complete back in the game since Adrian Peterson. This two time NFL rushing yards leader went to Ohio State University. He received numerous honors whilst playing for them. Zeke attended the John Burroughs High School in Ladue, Missouri. He was an outstanding track and field athlete in school. That also explains where he gets his running instincts. Combine that with his 228 lb frame you've got the nightmare, that linebackers and defensive backs dread. His stamina outlasts everyone in the league, which comes in handy later in the game. He's a young boy and is not an elite at any aspect of the game. He's good at multiple things, and his longevity is going to be dependent on his evolution.

Wow! This means the average man in the United States needs to work for at least 22 years to earn the same as Zeke earns in only 1 month.

The 24-year-old has a net worth of only $12 million. He's got a long career ahead of him to negotiate better deals that will see his net rise too.

Elliott Tattoo - Does he have one?