Join us and discover everything you want to know about his current girlfriend or wife, his incredible salary and the amazing tattoos that are inked on his body. Find out what house the American defensive tackle lives in or have a quick look at his cars! 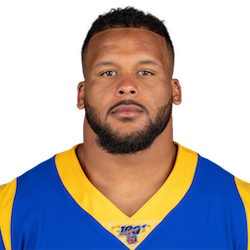 Dominate is what he does when he plays for his team. He's an absolute brick wall but also a classy defensive player at the same time. This 28-year-old has achieved everything he has and possibly could in just 5 seasons. He's the master of negative and disruptive plays. The burly interior defensive lineman from Pittsburgh, Pennsylvania, attended the Penn Hills high in his hometown. He attended the University of Pittsburgh and was named the ACC Defensive Player of the year in 2013. He was drafted by the St Louis Rams in the first round of the 2014 draft. The only thing that has changed between then and now is the team's name. They go by Los Angeles Rams now. His game, however, has only improved on a season by season basis so much so that he is ranked at number 1 in the Top 100 Players of 2019. A good run stopper, he's won numerous individual awards even before making to the NFL. His sacks are some of the most interesting to see because the power and accuracy in his moves are very addictive, and you can't help but enjoy the magnificence of his plays. It's going to be fascinating to see if this University graduate will ever get to win the Super Bowl with the LA Rams. His talent deserves a shot at it.

Wow! This means the average man in the United States needs to work for at least 33 years to earn the same as Cheat Code earns in only 1 month.

The work that he put in has paid off, and his net worth combining his salary and sponsorship deals is $40 million approximately. His contract extension in 2018, will see him make a guaranteed $87 million, which should see his net worth rise too very soon.

Donald Tattoo - Does he have one?