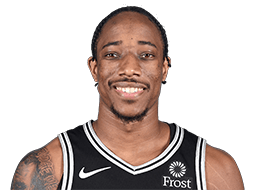 Born on August 7th, 1989 in Compton, California this shooting guard practiced basketball with his father since his childhood and was a known young talent during his high school years. As a top college recruit, he played for the University of Southern California and after just three years the Trojans he decided to join the NBA draft in 2009. He had an outstanding performances with the USC and often scoring double figures. He was selected by the Toronto Raptors as the 9th overall pick. The player played for the Raptors for nine straight seasons, including five playoff runs and in January 2018, he set a franchise record by scoring 52 points in a single game. This shooting guard / small forward eventually was traded to San Antonio Spurs in 2018 and became the first San Antonio player with a triple - double at home since the great Tim Duncan many years before. He is a 2 time All – NBA Team member and as well as a four – time NBA All – Star player. Though many people are not aware he actually suffers from depression and admits it himself, it seems like his depression is not affecting his game and he is often times in the spotlight because of his remarkable highlight plays.

Wow! This means the average man in the United States needs to work for at least 37.7 years to earn the same as Double D earns in only 1 month.

DeRozan Tattoo - Does he have one?