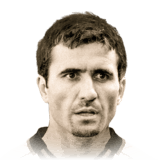 A few would call him overbearing, but his mates saw him as a leader. This Romanian legend has seen it all in his playing days. One of the few players to have played for both Real Madrid and FC Barcelona, he carved a name for himself in Turkey. His ability to play with either foot gave him an obvious advantage in his position. The Commander was also known to be an eager goalscorer and is his country's joint-top scorer ever. The record's going to take a while to get surpassed. We think he's worth about 50 Million Euros from a career in football.

What does Hagi currently do?