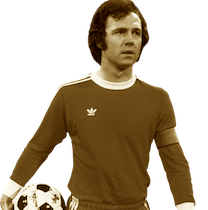 The inventor of the modern-day sweeper, this player was a West German legend. Like most famous German players, he too made his mark at Bayern Munich. Everyone that has played with him acknowledges his fearlessness on the pitch. He also brought a never say die attitude and top leadership qualities onto the pitch. One of the three players to have won the World Cup both as a player and a manager, he has racked up plenty other honors in his career. We think he's worth about 35 Million Euros. This is considerable if you factor in the era in which he operated.

What does Beckenbauer currently do?