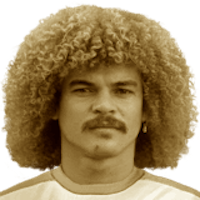 The man with the exotic hair, this midfielder, liked to see more of the ball, which is why he played a bit down the field. We're not sure what's it with the Colombians and their lackadaisical attitude to the game. He was a typical example of that. He did not contribute defensively and was hardly motivated, but did have his moments of magic on the pitch. As a naturally gifted ballplayer, his demeanor was overlooked by his coaches, and his career that lasted a little over two decades, the majority of which was in the Americas. We think he's not worth more than 25 Million Euros net.

What does Valderrama currently do?